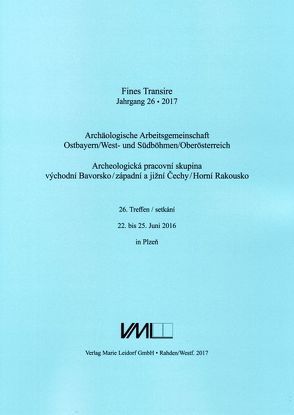 The volume contains a foreword, words of welcome, an obituary for B. Engelhardt, an introduction, and 15 papers on “foreign influence, cultural exchange, and procurement of raw materials”. These deal with the supply of raw materials in the Federmesser Complex of Northern Bavaria, mineral raw materials of the Linear Pottery in Southern Bavaria, the Baden Culture at Parkstetten, the amber route Baltic Sea-Mycenae, Central European contacts of BA Southern Bohemia, foreign influence, cultural exchange, and procurement of raw materials in the Urnfield period in Eastern Bavaria, extra-territorial contacts of the Bohemian Basin in the Urnfield period, LBA and Urnfield timber demand in Lower Bavaria and the Upper Palatinate, Aeneolithic settlement of Southern Bohemia, the change of graves and burial customs at the BA/IA transition in the Eastern Alps, imports as evidence for long-distance routes in EIA Bohemia, the EIA amber road, the exchange Bohemia-Southern Bavaria in the Latène period, the origin of an Altheim sickle blade from Lower Austria, and archaeological and geo-scientific analyses of nephrite from Styria. The book ends with a bibliography and lists of participants and authors.