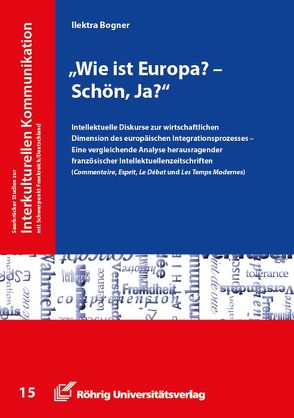 The conclusion of the Treaty establishing the European Coal and Steel Community, 1951, after the end of the Second World War, based on a significant decision and a viable consensus in the history of Europe. For the first time the member countries showed a joint and self-determined interest to put politicial, economic and social innovations into practise while maintening a maximum of national souvereignity for each of the countries.
Europe is nice – isn’t? Already in the beginning of the European integration process serious disparities have become apparent. Those were due to nationally specific conceptions of souvereignity and identity. Moreover they were due to the liberalization of the Common market. Opinions were diverging with respect to a functioning social system and how to guarantee social security in the member countries. Many of the above listed conflicts have especially become obvious in France, a country that has always been considered as a one of the most prominent European motors. The proclaimed ideal of national „grandeur“ and the up to the present day existing state regulated economic system have inevitably accumulated conflicts of interests, particularly with regard to the harmonisation of political and economic regulations on an European level. The positive and negative aspects of the European integration process and its economic impact have always been and are still an inherent part of the debates of French intellectuals. French intellectuals with their highly reputated status in the public sphere constantly reflect and mediate universal, cultural, political and social values.
The dissertation examined four very prestigious French intellectual reviews/journals Commentaire, Esprit, Le Débat and Les Temps Modernes. They shall be considered as intellectual entity and thus as meta-level of intellectual discourses. The four reviews/journals have a long-standing reputation, lay their focus on an interdisciplinary approach and invite a wide spectrum of authors who are representing diverse scientific, philosphical, political, social and economic spheres. The reviews and their authors regard Europe and the European integration process as a key topic for their debates and reflections. The Cultural Studies dissertation is based on an interdisciplinary approach and thus thoroughly contemplating political science, economic, historical, sociological and philosophical viewpoints and convictions. The intercultural impetus is provided by some significant aspects: the outstanding reputation and status of the examined reviews/journals in the media landscape of France, the specific status of French intellectuals in public life and the French perspective with the regard to the European integration process. This is especially true for the perception of the others, e.g. the representation of Germany as one of the motors of the European integration process and the diverging image of America within discourses about Europe and the globalization.
The period investigated lasted from 1992-2010. The period was marked by rapid changes in the polictial, social and economic framework. An impressive amount of European contracts and regulation had been concluded within relatively short intervals and thus had a very direct effect on a national level. The dissertation analyses in how far the crisis in the financial markets, which started in 2008 and led to a global financial and economic crisis in 2009, and with which intensity it generated a discursive incident/event in the intellectual reviews. The empiric character of the dissertation proved the application of the discourse analysis, the theories, methods and the terminology of Michel Foucault, whose concept of archeology and geneology emphasizes the processuality of history, to be coherent. According to Michel Foucault discourses have to be considered as operative. They are constituting reality. This methodological approach incorporates such aspects as: representing schools of thought, making collective and individual perspectives transparent, illustrating discursive structures and power/knowledge configurations – it signifies that power is constituted through accepted forms of knowledge, scientific understanding and ‘truth’. A key point about Foucault’s approach to power is that it transcends politics and it shall be considered as an everyday, socialised and embodied phenomenon and allows a critical approach to the European integration process. Siegried Jäger’s critical discourse analysis, based on Michel Foucault, served to systematize the intellectual discourses. With its intercultural and hermeneutic approach, the present study differs from other academic papers in so far as it aims to implement a new political economic perspective for the analysis of intellectual discourses with regard to the European integration process and its economic dimension. The intellectual reviews raise questions about political economic issues on behalf of economic historic, cultural, philosophical, sociological perspectives and in terms of paradigms of thought.
The corpus and the duration of the investigation period allow to give an extensive insight into the complex conflicts and controverseries with respect to the European integration process. They allow to determine problem areas, to show topical priorities, trends, developments and to propose an alternative hermeneutic approach. The dissertation intends to provide an impetus for a more intense and interculturally oriented renaissance of intellectual discourses on the European integration process and to describe the transformations of an intellectual milieu in constant change.