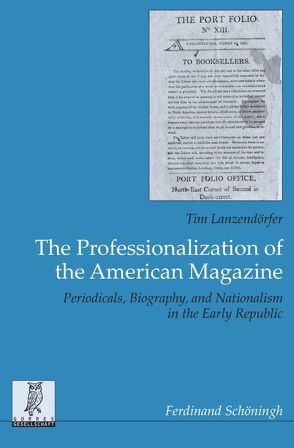 The Professionalization of the American Magazine shows that behind the commonly-assumed idealistic reasons for the publication of periodicals in the Early Republic stood, to a much greater extent than previously thought, the quest for monetary profit. Making use of a large corpus of periodical texts as well as archival sources, the book examines periodical production in all its facets, the publication history of the Philadelphia magazine Port Folio in particular, and the role of the magazine in the nationalist discourses around the War of 1812. Through the lens of magazine biography as an exemplary genre, it offers a comprehensive re-appraisal of the complex process of periodical production in the Early American Republic, arguing that the Early Republic’s magazines can only be fully explained if they are understood as vehicles for financial profit.

The Professionalization of the American Magazine online kaufen