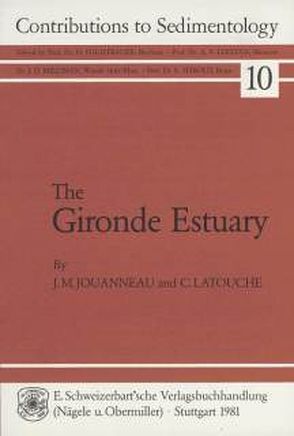 This article presents a synthesis of sedimentological and geochemical work carried out on the Gironde estuary until 1978. The drainage area of the Gironde estuary is the Aquitaine Basin. It is a Cenozoic sedimentary basin of about 80,000 km2 largely open to the ocean and edged by different massifs (Pyrenees, Massif Central). This basin profits from a temperate oceanic climate. The estuary is formed by the joining of two hydrologic, well individualized river systems, the Garonne and the Dordogne. As the development of local industrial planning is still rather limited, the equilibrium of the estuary does not appear to have suffered serious harm. Various ecological aspects and properties of the present-day environment are described. pH of waters fluctuates between the extreme values of 7.4 to 8.5. The percentage of saturation of dissolved oxygen may vary (1976) between 10 and 130 o/oo, especially seasonally. The quantitative changes in nutrients result from the upstream dilution and oxidation of organic matter. Upstream, high levels of trace-metals associated with Suspended particles have been determined; further downstream, a drastic decrease of these metals is observed and in the mid-estuary heavy metals concentrations agree with world average values found in not significantly polluted systems. This upstream/ downstream decrease in metal concentrations in the suspended particulate matter is attributed to a mobilization of the metals which become solubilized from the suspended material. In order to precise these mechanisms, special methods were used,such as the double tagged method with radioactive isotopes and chemical sequential extraction. The Gironde estuary, situated in a well known environment, appears to be a rich source of in- formation for specific estuarine studies, and for the evaluation of the substance transfer to the continent/ocean interface.