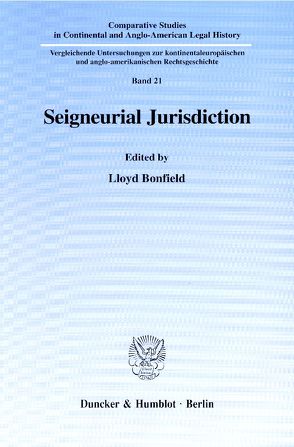 It is the aim of this collection of reports to establish a basis for comparing various seigneurial courts in pre-modern Europe. The contributors are largely medievalists.

To come to terms with the subject, a defintion of courts which were seigneurial, given the variety of legal heritages, had to be set up. One of the first observations made was that on the Continent, where central courts were less prominent, there appears to be a more flexible notion of seigneurial jurisdiction. The contributors then look at the variety of jurisdictions in which lords in medieval and early modern Europe governed the legal relations of their vassals. Also the seigneurial jurisdiction is placed within its national context as one variety of courts which co-existed with other forums. Next the authors observe the origin and nature of substantive law which was implemented in the courts. Finally, focus is put on procedure. In England the medieval period witnessed considerable developments in the way in which cases came before the manorial court and how proof of the compainant’s claim was ascertained.

The reports provide a framework for further study. They demonstrate similarities and differences between seigneurial jurisdictions in England and on the Continent. One significant observation is that seigneurial jurisdictions seemed to have survived longer on the Continent than in England. Moreover, Continental seigneurial courts seemed to have serviced a broader strata of society. Yet, what is perhaps most striking are the similarities in procedure and in the process of custom making which the collected reports uncover.