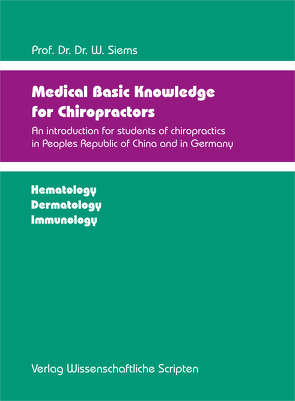 Preface
Chiropractic is a holistic health care modality that focuses primarily on the musculo- skeletal structure of the body and its relationship to body function and the central nervous system. A chiropractor manipulates the musculoskeletal system, particularly the spine, to relieve pain and help the body heal. Medical professionals who practice chiropractic adhere to the belief that misaligned vertebrae cause blockages along the nerve bundles within the spine. These poorly aligned vertebrae are referred to as subluxations. These subluxations are considered a mechanical disorder of the spine.
When a body experiences a mechanical disturbance, it disrupts the messages that are sent from the nerves to the brain. This causes the nerves to not function properly. Most of the body depends on the central nervous system to function smoothly. When the spine is affected by subluxations, a person’s overall health will usually deteriorate.

Chiropractic care can improve the function of the nerves in the body and contribute to better health. Patients seek this particular type of treatment when they have back pain, neck pain or migraines. Chiropractic can also help people who suffer from recurring colds or joint pain in the jaw, shoulders or knees.

Asthmatics or women with prementrual syndrome PMS can also benefit from chiropractic therapy. Accidents, stress, tension and other factors can cause the spine to shift. If any of these problems occur, she or he may consider chiropractic therapy.
Chiropractors do not prescribe medications or perform surgery on patients. This is because of their belief that the body has the power to heal itself without outside factors intervening. Despite this belief, they often encourage patients to exercise or change their diet to achieve a healthier body.

However, chiropractic with its adjustments, but especially with the often performed jerky manipulations, also in the area of the cervical spine, sometimes experiences criticism by medical doctors and scientific societies.

The effectiveness and scientific nature of the method are disputed, and in most countries chiropractic is an unregulated profession that is not recognized by the state.

In alleviating back pain, according to research and observations by Edzard Ernst, one of the leading protagonists of chiropractic, bone straightening is moderately success- ful, but no better than conventional treatment. And for the fact that chiropractic helps against asthma or migraine or other internal complaints, there is, in his opinion, no valid evidence. But there is evidence of dangerous side effects. Arteries, in particular, can be damaged by back-pressing and neck-stretching. Edzard Ernst cited several serious cases, including stroke and paraplegia, as well as deaths. Chiropractic, in his opinion, is the most dangerous of all alternative therapies. Chiropractic, like many alternative treatments, is controversial, also says Petra Rudnick, a general practi- tioner and naturopathic doctor at a German medical center, adding, „Due to improper technique by the therapist, complications can occur, such as numbness or paralysis.“