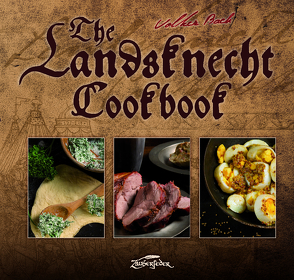 The bold image of the Landsknechte, with their extravagant clothing and adventurous deeds, has endured to this day. Back then, they were not least regarded as insatiable drunks and fastidious eaters. Officers feared their wrath if food supplies failed to arrive. Their songs tell us of complaints about hunger and cold, but also of dreams of roasted chickens and cool wine.

But what did they have on their plates? In a detailed introduction, this book traces the facts behind the legend. What was the life of the Landsknechte like? How were they fed? What foods did they know and how did they prepare them? Based on sources from the 15th and 16th century, the book offers over 50 recipes that were familiar to the Landsknechte and nourished them in good or lean times.

Over 50 recipes do justice to both historicity and today’s tastes. Each original recipe is accompanied by instructions for the preparation in the modern kitchen. All ingredients and basic dishes are described thoroughly, and even beyond that, the cookbook offers detailed information about the way of life of the Landsknechte, such as eating habits and table manners.