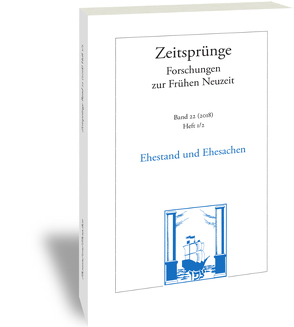 Until the early modern period, marriage is the only institution in Europe which allows for the deciphering of nothing less than the divine organization of human coexistence. But ever since Luther’s vernacular treatise “Von Ehesachen” (“On Marriage”), marriage has been regarded as a „public estate“ of matrimonial matters and, to that extent, as a micro-logical testimonial of a macro-rational model of order whose influence on the history of literature is still not fully developed. This volume offers comparative and neo-philological perspectives on both canonical and long-neglected texts supplementing research discussions established in medieval studies as well as in studies in cultural and social history. The historical and systematic scope of the case studies collected here is intended to give an impression of the complex interlocking the institute of marriage generates between literature, theology, and legal doctrine, and the dynamics that have developed in European cultures from the fifteenth to the early eighteenth centuries.