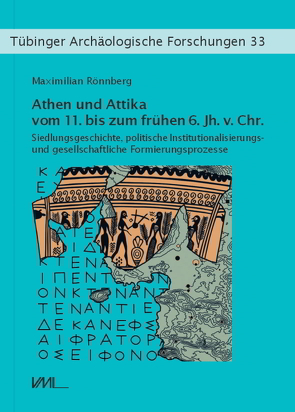 Established narratives of early Athens assume a “Dark Age” phase, the sudden emergence of the police in the course of the 8th century B.C. “renaissance” and an Early Archaic “recession” leading to a pre-Solonic crisis. The study presented here focuses on longer-term socio-political processes in order to test these ideas. The archaeological sections are preceded by a chapter on the historical development of Athens up to the early 6th century B.C.. The critical evaluation of the information value of later sources leads to a questioning of the assumption that the Athenian state was already fully developed in the 7th century and underwent substantial reforms under Solon. Instead, a picture of succes-sive increase of statehood in the course of the Archaic period emerges. Based on a systematic collection of archaeological material, the settlement history of Attica from the sub-Mycenaean to the Early Archaic period is then traced. The concept of an “internal colonisation” of Attica from its putative centre is contrasted with the hypothesis of protracted, decentralised processes of increasing settlement density operating at small spatial scales. Finally, the cemeteries and sanctuaries are investigated diachronically for indications of social transformation processes. In both cases, the temporal trajectory can be divided into a phase of greater social fragmentation in the 11th to 9th centuries B.C., followed by a phase of increasing socio-cultural connections from the 8th century B.C. onwards, while the 7th century B.C. emerges as a time when socially prominent roles began to solidify. Overall, while developments picked up pace from the 8th century onwards, the trajectory is continuous overall, and the Early Archaic period is identified as a crucial formative phase. In contrast, the idea that the Athenian polis “emerged” in the 8th century B.C. is misleading.